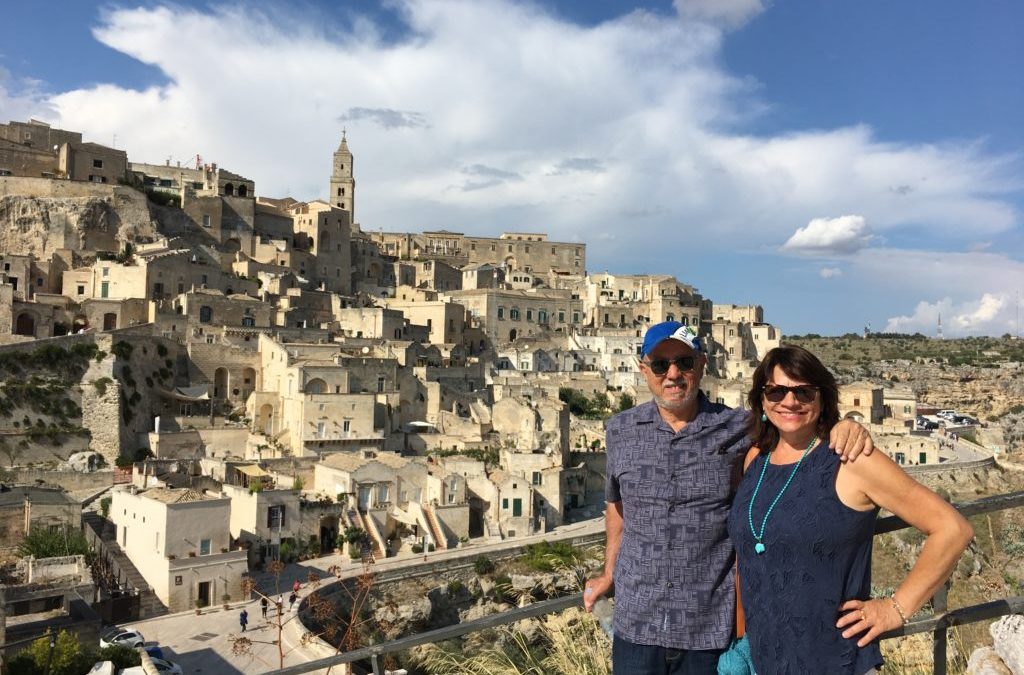 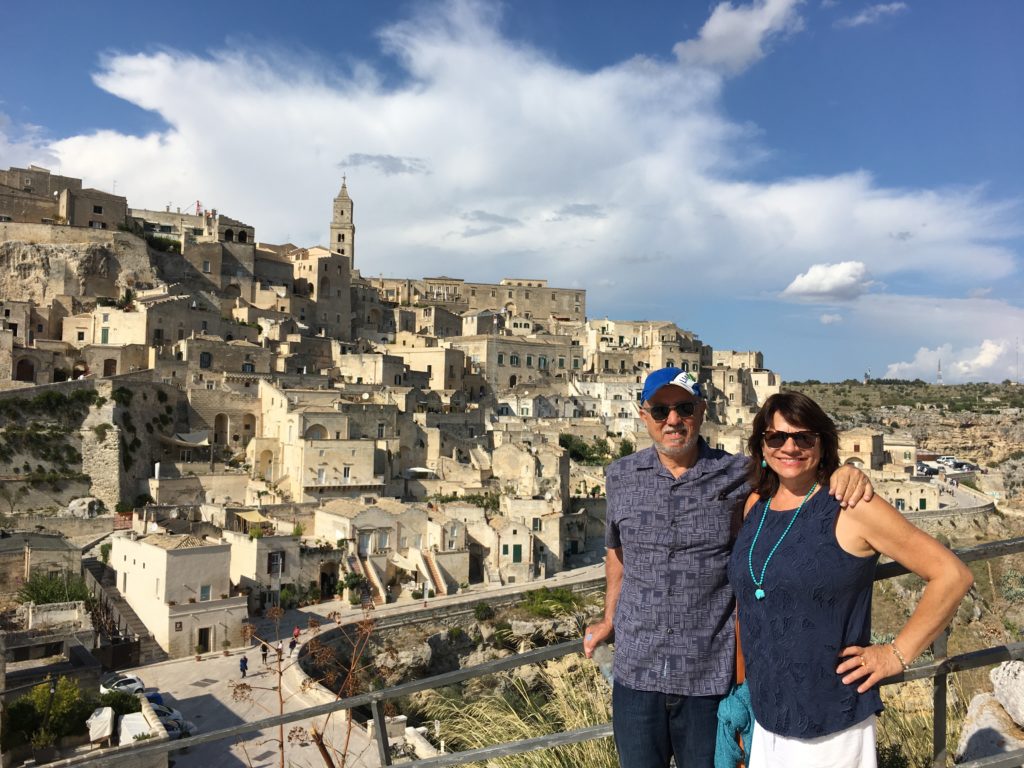 The culture of Italy is diverse. To experience a place like Matera in Italy’s southern region of Basilicata in the middle of nowhere, is other-wordly and totally unique. This city’s cultural heritage is awe-inspiring, where we find cave dwellings carved from limestone, called the Sassi. Inhabited since the Bronze Age up until the 1950s, they have now been renovated to become part of the modern world. The overall energy is mystical and mysterious.

When I visited Matera with my husband this past September, I was amazed at the scale of Matera. I was expecting a much smaller town of cave dwellings in an out-of-the-way landscape. It is that, but so much more! Roads taking us to Matera are modern although some are curving through the landscape, somewhat like driving in parts of Tuscany. Normally, the average tourist doesn’t venture here, although each year the number of curious visitors increase. This trend will continue  especially because Matera was chosen as the 2019 Cultural City of Europe, winning over the popular cities of Siena and Ravenna.

Visit the caves, The Sassi:

Surprisingly, we found an enriching life throughout the piazzas that are filled with restaurants, hotels, gelaterias, churches and museums surrounded by the hillsides of the Sassi caves. We loved our walking tour, as it was the best way to see everything.  To ‘walk in their shoes’ kind of experience we explored Le Case Cisterna Cave. It was actually a couple of caves joined together, as they were not usually this large.  An informative audio guide shared information as we walked around each section. 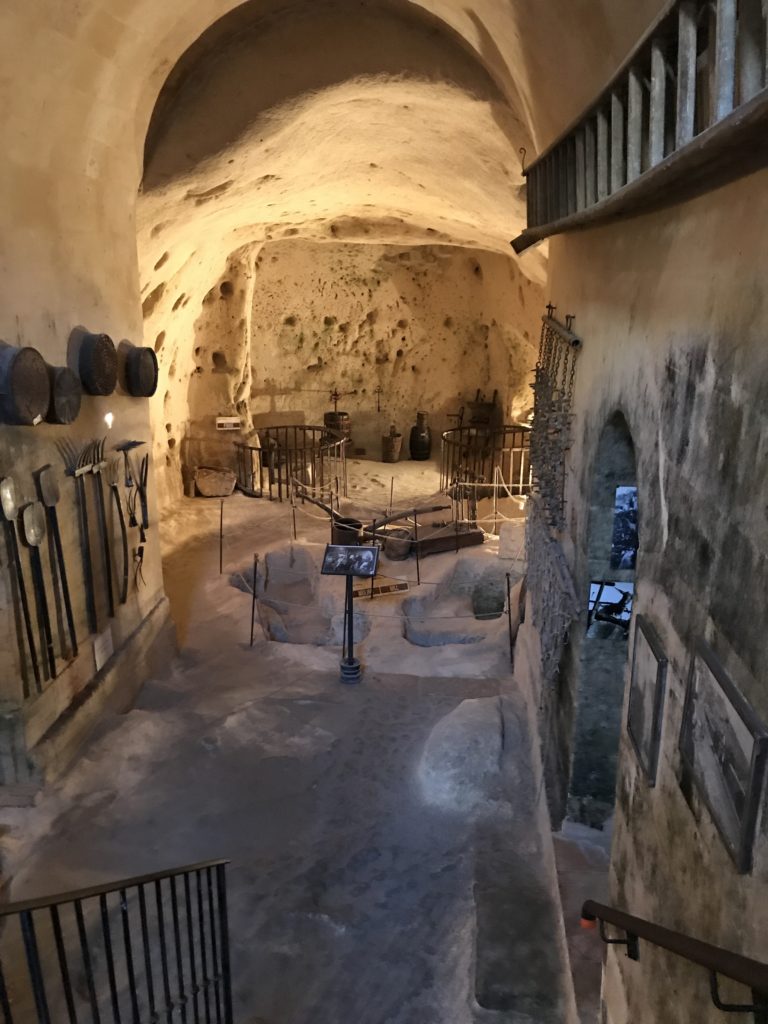 There are three levels of existence here–cave dwellings, the piazzas and homes built during the the 13th to 17th centuries, and the modern city built in the middle of the 20th Century. The natural limestone caves were further excavated to become a mass of tunnels and caverns and inhabited by monks and emperors, among others. Wars and economic decline left the city in decay from the early 1800s up until the 1950s. 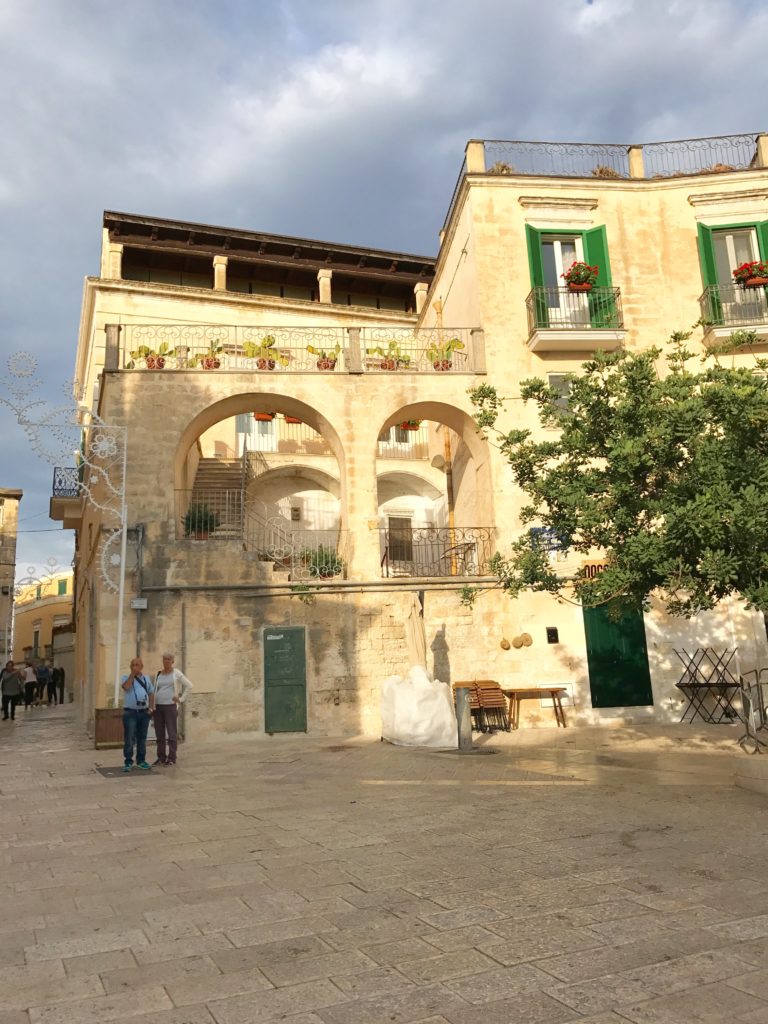 One of the many piazzas (town squares) of Matera

However, beauty cannot be lost forever. The history and timelessness of the Sassi were declared a UNESCO World Heritage Site in 1993, which brought  attention to Matera once again. More recently, over 20 films have been shot there and several famous ones including The Passion of Christ with Mel Gibson and The Gospel According to Matthew, because of its resemblance to the city of Jerusalem. 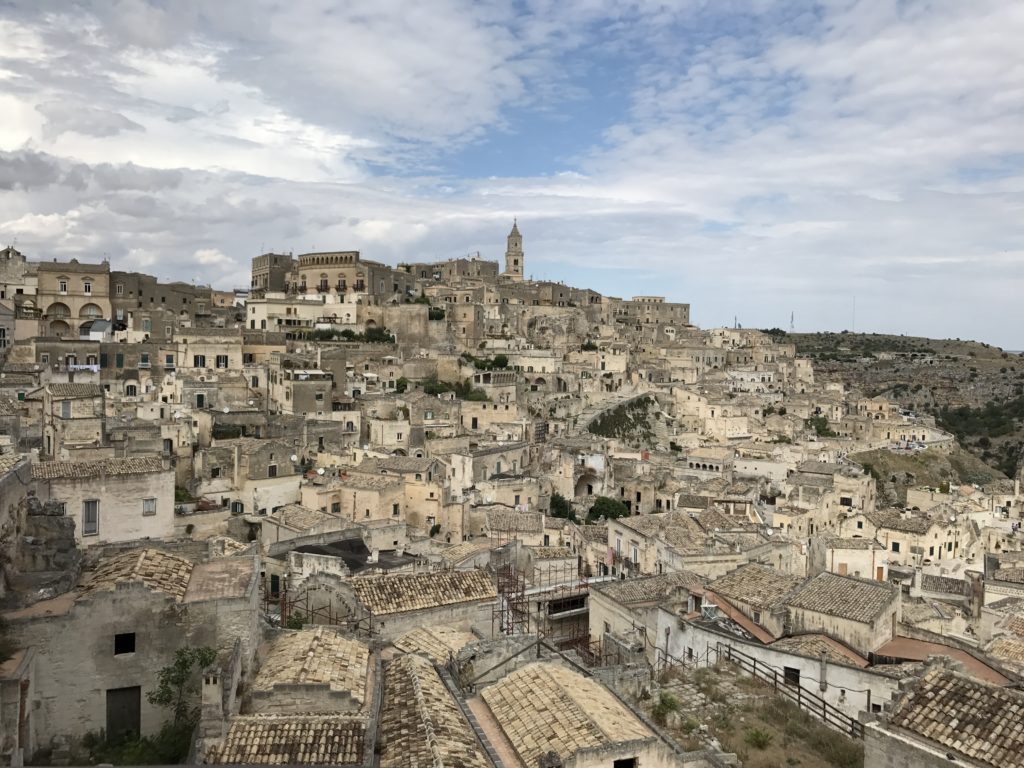 Matera is yet another charming example of Italy’s surprises, exotic, offering delicious cuisine and full of history–just a few of the reasons I will be taking one of my 2018 Italy Retreat For Women groups here.  My Retreat and Tour also includes Alberbello, and Lecce and Otranto in the southern region of Puglia, the “heel” of the boot of Italy. 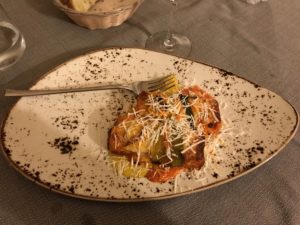 You are welcome to reprint, copy, or distribute Lenora Boyle’s article, provided the above author credit is included.