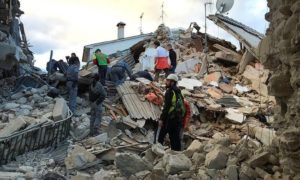 A golden retriever was rescued after being buried under rubble for 9 days in the Italian earthquake. It’s heartwarming after all of the devastation to see the rescue video from BBC.

As many of you know a 6.2 magnitude earthquake devastated Amatrice. Norcia, Accumoli, Arquata del Tronto and Pescara del Tronto on August 24 during the middle of the night.  In addition they suffered from 200+ aftershocks (one registereing 5.5). In addition to losing their homes, historical buildings, many of their neighbors and family members have died. They may never be able to return to Amatrice, the epicenter of the earthquake.  Right now Italy plans to build simple, wooden chalet-style huts within three months for the 2,500 people displaced.

Over 215 people had been rescued since the quake, but many are still buried under the rubble.

Sometimes weeks after a disaster, the people are forgotten and we move on with our lives, but I want to encourage everyone to donate, even a small amount, to help in the recovery. Italy is a treasure to the world.

If you would like to help earthquake in Italy, donate to the Italian Red Cross, here in USD or other currencies.

And most of all, do not cancel your travel plans to Italy. It is beautiful here and most of Italy is in full force. Although the earthquake was devastating, it was concentrated in a 12-mile radius and no other damage was seen in the rest of Italy.
Grateful for any help given for the survivors of the earthquake!