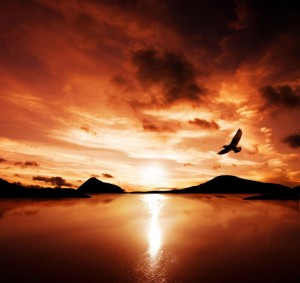 These are some of my favorite quotes on vision.

When Janey sent me a quote from mountain climber, W.H. Murray and said it had helped her decide to join my September 2012 Italy Retreat for Women, I felt her excitement.  She said that after she bought a book of poems, and read this particular quote in the front of the book, her vision became crystal clear.  She had been debating her decision.

Many of us can relate to the hesitancy and doubting of our dreams, right?  The final puzzle piece snapped into place for her.

I knew what she meant because W. H. Murray’s words have been close to my heart for the past 30 years. Whenever any of my dreams or visions have seemed unreachable, I would read his quote. As a mountain climber and prisoner of war, he had experienced a huge amount of visions and obstacles to climb.  But commitment is like a magnet, and gathers the resources, like iron filings, toward us giving us the clarity  and support of our visions.

Quotes from James Allen’s book “As A Man Thinketh” and Wallace Wattles from “The Science of Getting Rich,” and Rosabeth Moss Kanter’s complete the Thoughtful Thursday quotes.

Until one is committed, there is hesitancy, the chance to draw back…Whatever you do, or dream you can do, begin it. Boldness has genius, power, and magic in it.  Begin it now.
~ W.H. Murray, Scottish mountaineer and writer

A vision is not just a picture of what could be; it is an appeal to our better selves, a call to become something more.
~ Rosabeth Moss Kanter, American business speaker and consultant

Cherish your visions, cherish your ideals; cherish the music that stirs in your heart, the beauty that forms in your mind, the loveliness that drapes our purest thoughts, for out of them will grow all delightful conditions, all heavenly environment; of these, if you but remain true to them, your world will at last be built.
~ James Allen,  As A Man Thinketh

Never get afraid that you will lose what you want because some other person “beats you to it.”  That cannot possibly happen; you are not seeking anything that is possessed by anybody else; you are causing what you want to be created from Formless Substance, and the supply is without limits.
~ Wallace Wattles, The Science of Getting Rich

Happy Visions!  What are some of your favorite Quotes on Vision?  Let me know how you make your visions come alive.