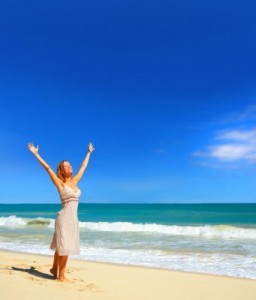 VITAMIN D, the SUNSHINE VITAMIN:  It’s that time of year in the northern hemisphere when there is cloud cover about 70% of the time, and many people begin to feel dreary.

I started taking 5000 international units of vitamin D3 every day exactly  one year ago in January 2009. I wrote the first of 4 posts about the amazing healing properties of Vitamin D3. My main purpose was to offset this feeling of gloom that I feel in the depth of winter.

After only one week, my mind became clearer and that clarity has lasted. I didn’t expect that result, nor did I figure I’d notice any changes that quickly.  It was as though a light had been turned on.

Funny thing is, recently I read Linda Carroll’s article  on msn.com that mentioned a report published in 2006  where Belgian researchers “used functional MRIs to look at the effects of broad spectrum light – which is similar to daylight. They concluded that as soon as people were exposed to bright light, brain activity sparked more strongly. When the light was taken away, brains became less energized.”

I don’t know that this means that all the  people who live in sunny climates have more energized brain activity but when I took Vitamin D it was like pouring sunlight into my brain.

To track my progress, a few weeks ago, I had my blood work done again. The blood sample was sent to Mayo Clinic and I’m happy to report that in one year, my Vitamin D3 level increased from 24 ng/ml to 58, so in twelve months it was raised by 60%. Optimal level is 50-65 ng/ml.

“Big Decision? You May Think Best on Sunny Days” article  by Linda Carroll on msnbc.com also mentioned: “The latest study, conducted at the University of Alabama at Birmingham, found that people were almost three times as likely to have impaired cognition after gloomy weather compared to those in sunny climes, if they were also experiencing some symptoms of depression.

In yet another article entitled, “We Will Be What We Eat” from the February 2010 issue of the U.S. News & World Report, Alice Lichtenstein, director of the Cardiovascular Nutrition Laboratory at Tufts University, stated that “Fewer than 7 percent of Americans between 50 to 70  get enough vitamin D from the foods they eat…”

It’s tough to get enough vitamin D from foods. Since Vitamin D is naturally found in very few foods (like cod liver oil, egg yolks, salmon, and tuna) it’s important to add it to your diet. Some foods like milk and cereals are fortified with vitamin D. Our bodies form vitamin D when our skin is exposed to the sun.  Hence, the problem in northern climates.

Many doctors fear giving higher doses of vitamin D-3, because during their medical training they remember hearing that vitamin D is linked to calcification of tissues.  In fact, calcification of blood vessels and other tissues is much more common with low intakes of vitamin D-3 than high intakes.  Some doctors  may not be familiar with the newer studies, which clearly show that these fears are unfounded.

90 % of what we know about Vitamin D has only been discovered in the last 10 years, as it wasn’t measurable before that. [I shared my experiences with my doctor and asked him to check out the research both from the medical and alternative communities.]

An article that was prepared by Hematology Week editors from staff and other reports in Hematology Week mentioned, “This study is the first indication of a genetic link between vitamin D action and heart disease,” says Robert U. Simpson, professor of pharmacology at the University of Michigan Medical School and one of the authors of the study in the journal Pharmacogenomics.  More research needs to be done and it is ongoing.

Dr. Mercola promotes the importance of getting your blood checked so you have an idea of your levels. He also has vitamin D available as a spray, which is readily absorbable. I’ve always ordered my vitamin D3 from Women to Women where the 30 capsule bottle is $7.00. It’s available from most health food stores also.

The powerful point I want to leave you with is that it’s not just a “sunshine vitamin”– feel happier vitamin, although that makes Vitamin D3 worth its weight in gold, but a vitamin that  has been shown to regulate 2000 genes in your body and have healing or preventative affects on certain cancers, diabetes, immune system, and  heart disease (plus much more).  It is essential for certain absorption of calcium and other nutrients which strengthen bones.

Have you been experiencing better health from taking Vitamin D?