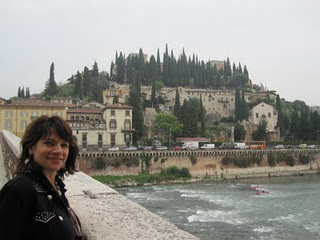 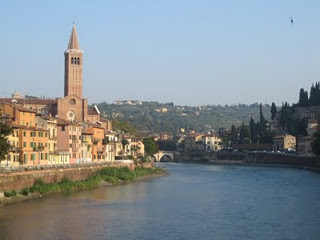 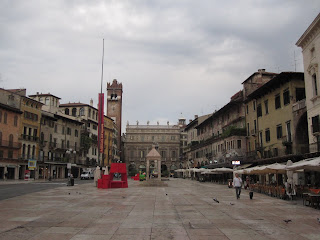 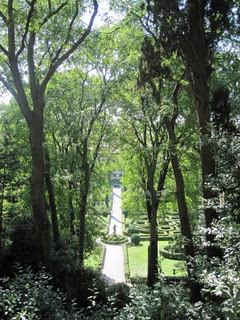 Imagine walking in your neighborhood and every other shop is selling Italian brioche, croissants filled with chocolate, cream, local jams and alongside them is the best coffee you could ask for. In addition, well dressed grandmothers walking arm in arm, and an older gentleman riding by on his bicycle followed by another il biciletti ridden by a store owner in her high heeled shoes, tight skirt and Prada purse on her shoulder. Look ahead and another grandmother is walking eating her gelato.

Italians seem to live more slowly but drive faster, even the bus drivers race around the streets, taking the turns like they are in a race.
Last Sunday, I finally had a day to take it easy after 2 1/2 weeks of constant exploring and activity in the Italian Riviera and here in the Veneto. There was a 2 day Tocati Festival in every piazza in Verona– Italians and visitors dancing, singing and playing games.

Around every corner were beautiful churches and Italians celebrating with music, dancing in the streets, while children played games with adults–chess, checkers and other traditional/ancient games until late into the evening. Some of the games involved slingshots and small spinning tops. The quality of the sunlight, the sounds, the love–all so much for the heart and eyes to take in.

Piazza Erbe was once a forum during the Roman Empire days in 100AD, but now it is filled with vendors selling food and souvenirs to tourists. However, in preparation for the Tocati Festival all the vendors booths were driven away and in the early morning, I took this photo of an empty Piazza L’erbe.

A beautiful river meanders around the town connecting outlying neighborhoods by old and new bridges. Buildings that are 500 to 2000 years old seem to have personalities of their own. I try to imagine life as it was when they built these incredible works of art. (One of the photos on top is a garden in my neighborhood, recently voted the best garden in Italy–Giardino Giusti).

Thursday night as I walked the 15 minutes to my apt. from Piazza Erbe, I heard an incredible 20 piece orchestra performing in Piazza dei Signori. Surprises abound in Italy, not just in Verona, but each city.

I sadly leave Italy today after being here for 4 weeks. Now for the adventure of traveling back to the U.S.