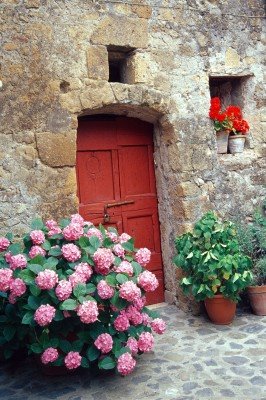 The Italian language is so musical and beautiful that I feel a thrill in my heart every time I hear it. It matches its surroundings! It was interesting to then discover that I was not the only one who felt this way. Originally I thought my response was because upon hearing it, it conjured up happy childhood memories of listening to my grandparents speaking their native tongue. But, come to find out, many people learn Italian because they like the way it makes them feel.

If you’d like to hear Italian music and radio hosts speaking Italian, you can listen to World Italian Radio 24/7 online at Radio Italy Live. Just click on the ascolta/listen link on the left to choose the format needed to listen. It’s fun and worth it. If you’d like to listen to other Italian songs you may listen here also. In order to hear correct pronunciation of particular Italian words check out this site.

Like the other Romance languages, Italian is based on Latin. However,the history of the Italian language is pretty interesting. Italy did not become a unified country until 1861 as it was composed of many independent city-states with numerous dialects, governed by various local princes and an assortment of European rulers. For centuries, Italians wrote and spoke in local dialects,so most of them could not understand anyone from another region. It would be like us traveling from Florida to Georgia and not being able to understand each other.

In the sixteenth century, some Italian intellectuals got together and decided to choose a universal dialect and call it Italian. They found the most beautiful dialect ever spoken in Italy. This just happened to be the personal language of the great Italian poet from Florence (Firenze), Dante Alighieri of Divine Comedy fame, 1321.

Dante did not write in Latin because he felt it was an elitist language that could be learned only by having an aristocratic education, not available to everyone. So, he began using the real Florentine language spoken by the residents of Florence.

As Elizabthe Gilbert says in her book, Eat, Pray, Love, Dante “wrote his masterpiece in what he called dolce stil nuovo, the ‘sweet new style’ of the vernacular, and he shaped that vernacular even as he was writing it, affecting it as personally as Shakespeare would someday affect Elizabethan English….No other European language has such an artistic pedigree. And perhaps no language was ever more perfectly ordained to express human emotions than this forteenth-century Florentine Italian, as embellished by one of the Western civilization’s greatest poets…..scholars call his pretty Florentine vernacular a ‘cascading rhythm’.”

That being said, I’m happy the language is so poetic and beautiful, but I find it difficult to learn! Any tips on learning more easily? How about I live in Italy for awhile and study there?!