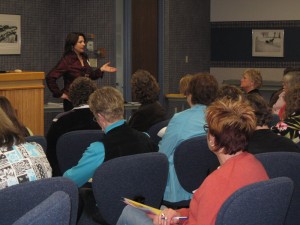 In my recent presentation at a women’s conference, I emphasized how cultural beliefs affect women on such a deep level, that they can be insidious.

Often, we don’t even know that we are participating in that limitation or conditioning. It’s similar to the barracuda that was placed in a fish tank with smaller fish. He could’ve had a great meal, except that the scientists conducting the experiment had placed a clear divider in the tank to separate the barracuda from his enemies. After hitting his head on the clear divider over time, the scientists removed it.

Right, the barracuda repeatedly swam to the same spot, and would not go past where the barrier ‘used to be’. He was conditioned in the same way many of us are, often unknowingly.

In light of what I was teaching, I was thrilled to hear one of the main keynote speakers share how limiting beliefs about women in academia affected her in the 1970’s (and how she overcame them). Sally Mason is the new president at the University of Iowa. When she began her higher education, she had wanted to become a field biologist, but her male advisor said women can only be in the laboratory, not in the field, so that’s what she did. When she decided at one point that she would get her masters degree in biology, similar advise was given. Women don’t finish getting their masters degrees. Now, I know that perhaps there was some truth to that, HOWEVER, does that mean that NO woman should pursue advanced degrees, even if it hadn’t been done much before– like the barracuda? We’ve come a long way from the limiting beliefs about the capabilities of women but there is more road to cover. We can start with our own personal journey. The number of female college presidents has more than doubled since the mid-1980s. 24 percent of all newly hired presidents were women, but many are presidents of 2-year colleges.

Have you broken through the conditioned barriers in your mind? Are there any thoughts you are believing such as “I won’t be successful because it hasn’t happened yet?”